The histogram example is used to display the interval series. In order to construct a histogram from the data of the variational series at equal intervals, as for the construction of the polygon, the values of the argument are plotted on the abscissa axis and the frequencies or relative frequencies are plotted on the ordinate. Next, rectangles are constructed whose bases are segments of the abscissa, whose lengths are equal to the lengths of the intervals, and the heights are segments whose lengths are proportional to the frequencies or relative frequencies of the corresponding intervals.

As a result, a stepped figure is obtained in the form of rectangles shifted to each other, the areas of which are proportional to the frequencies (or relative frequencies).

If you need a histogram sample, then you’ve found the right page. Thus, you can deal with your assignment much easier. When you get an assignment, you can check out our blog to find the suitable sample for your task. As a rule, students can find a sample they need on our site. If you need to deal with a histogram, then look through the following sample.

A company producing aluminum plates decided to check the accuracy of 25 mm thick plates. Arbitrary 100 samples were chosen and their thicknesses were measured (see the table below).

Find how many samples lie within standard deviation range. Build a histogram.

According to the Sturgess rule:

The mean value is the average thickness of the plates:

We must use a sample standard deviation as not all the plates were measured.

Since not all the plates were measured, the variance is: 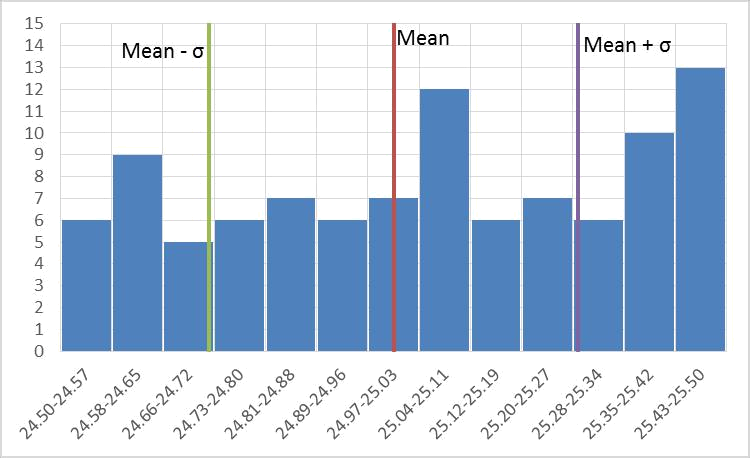 The total number of the samples within standard deviation range is 57.