An athlete participates in a 200 meter race. He or she starts at rest and accelerates at constant acceleration for 5 seconds. After that, the velocity of the athlete is constant until the end. Find the distance and speed of the athlete at the 5th second from the start. Suppose it takes 15 seconds for the athlete to run the entire distance of the race. Find the value of the acceleration.

The speed of the athlete at the 5th second of the sprint can be found from the equation below:

Substitution of the above values yields:

The distance at the 5th second can be found from the equation below:

is the distance at the beginning of the race, (

Substitution of the above values yields:

The distance of the first section, which was found above, is

From the above equation, the acceleration is:

The magnitude of the speed at the 5th second of the race therefore is:

The magnitude of the distance at the 5th second of the race therefore is:

A basketball player tosses the ball from the height of 1.8 meters from the floor. The initial speed of the ball is v0 and the initial angle under which the ball was thrown is

vertically, as shown in the picture below. Write a set of equations for the horizontal and vertical positions and velocities of the ball as a function of time. The ball reaches its highest point in 3 seconds. How high is the ball above the ground? 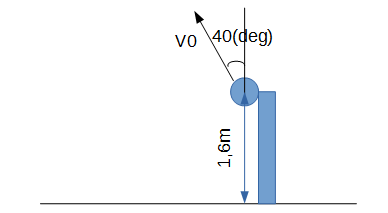 Let us place a two dimensional coordinate system in such a way that the Y axis is a vertical axis and X axis is a horizontal axis, and the origin is the initial location of the ball, as shown in the picture below.

From the picture, the projection of initial speed

on the vertical plane is

); the projection of initial speed

on the horizontal plane is 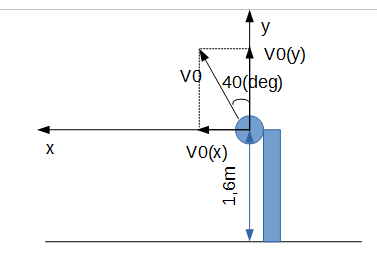 The general equation for the position vector depending on time is: r=

, where a is an acceleration of the ball and t is the time.

We can rewrite the above equations as a system of four equations by projecting their components on vertical and horizontal axes:

At the highest point, vertical velocity is equaled to 0. Therefore, we can find an initial speed

The distance at the highest point would be: 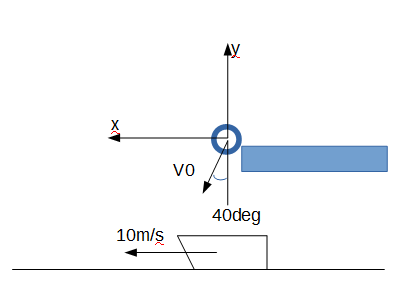 The vertical and horizontal components of the initial velocity of the ball as seen by the person on the bridge are as follows:

The vertical and horizontal components of the initial velocity of the ball as seen by the person on the boat are as follows: 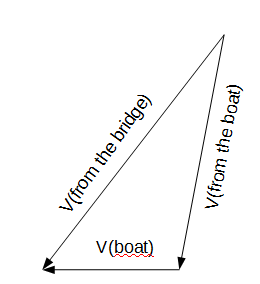 We presented you several physics problems with their explanations and posted some of solved physics problems before. Our experts did their best to demonstrate how various formulas and approaches can be used on practice. You can’t use our sample paper of physics as you are probably given another task and your instructor has requirements that differ from those specified above. But you can ask our experts to help you with any type of technical projects and they will be delivered in a timely manner.